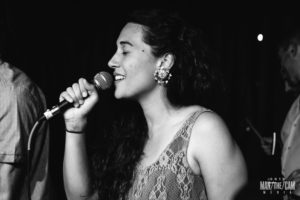 Renata’s life in music started at a young age with her dad’s singing. She soon started piano lessons and joined the San Francisco Girls Chorus, giving her the opportunity to tour Japan, sing with the San Francisco Opera, and record on the soundtrack of the hit movie ‘What Dreams May Come’. Since then, she has developed as a versatile vocalist, singing in many different styles in English, Spanish and Portuguese with Taki Nan Latin American Ensemble at UC Santa Cruz, the San Francisco Lyric Opera, Bloco Alegria, and with her father and two sisters in the Austin Tabancay Family Band. Fans describe her voice as “warm, resonant, uplifting and soothing”. She is a founding member of POPgoji, the Brazilian Soul band based from Portland, OR. With POPgoji, Renata has performed on numerous stages, including at What The Festival, Portland Center Stage, and on Sofar Sounds.