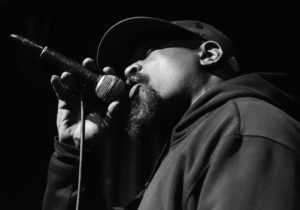 Chicago-born poet and emcee Michael (Mic) Crenshaw fell in love with music at a young age while living in Minneapolis. His teenage years were challenging as he actively confronted white supremacist gangs that were a growing part of the hard-core music scene. He eventually chose to escape the violence and moved to Portland, where he quickly became one of the most respected artists in the Northwest, and his community efforts have had both local and international impact.

Mic has released numerous solo albums and been part of various Hip Hop projects. To his credit he has opened for Public Enemy, Immortal Technique, KRS-1, Mos Def and The Roots to name a few. Mic played the Bibo Festival in Halle Germany and the SWAG Jam in Berlin in 2015 and recently toured multiple cities including LA, (http://www.laweekly.com/slideshow/dead-prez-mic-crenshaw-echoplex-6476682) Oakland and Seattle 2016 with Dead Prez. Crenshaw just returned from Trinity International Hip Hop Festival in Hartford Connecticut U.S. where he was helping to establish a U.S. college touring network for African artists who participate in the Afrikan Hiphop Caravan.

In addition to his highly-acclaimed work in spoken word and Hip Hop, Mic co-founded GlobalFam, a non-profit (EducationWithOut Borders 501c3) project to create and maintain a computer center for disadvantaged youth in Burundi, Central Africa. Over 400 people have received free training, and it is now expanding, generating revenue and creating jobs. Mic also partnered with Education WithOut Borders (EWOB), which supports education, music and art initiatives in Portland and beyond and serves as an umbrella for the local Books For Prisoners chapter and GlobalFam itself. GlobalFam has blossomed into a music label, production, promotion, artist management, and education company providing mainstream entertainment that supports Social Justice Activism.