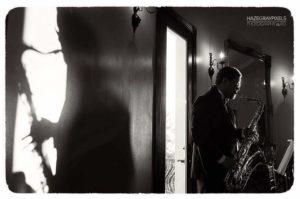 Adrian P. Baxter learned the entrance requirements for the classical performance program at U of O from Carl Woideck, author of “Charlie Parker: His Music and Life”, during his first year of college at Lane Community College. He then attended the University of Oregon. He dropped out of college to join “The Cherry Poppin’ Daddies”, unable to attend school with a heavy touring schedule, and remained with the band through their “Big City Muscle Car”, and “Kids on the Street” albums which were re-compiled with new material in what would later become the platinum “Zuit Suit Riot” Album. He returned to school, played in local bands, worked part time as a bartender, studied theory and jazz performance under Steve Owen, arranging under Garry Versace, and earned a Bachelor of Music (BM) in Jazz Studies. Now based in Portland, OR, transcribing, arranging, and performing with several local artists, and teaches for M.U.S.E..  He has also enjoyed performing with Les McCann, Tito Puente Jr., Melcochita, Ramsey Embick, Mel Brown, Andre St. James, Dr. Freddy Vilches, and many local Portland artists.